Loktak Development Authority is the nodal state government organization mandated for the conservation and sustainable management of Loktak Lake. It was one of the first special purpose vehicles constituted for wetland management in the country. The Authority was constituted in 1987 as a government society (under the Societies Act XXI of 1860) under the aegis of the Department of Irrigation and Flood Control, Government of Manipur.

The enactment of the ‘The Manipur Loktak Lake (Protection) Act, 2006 (Manipur Act 3 of 2006) notified in the Manipur Gazette, Imphal, the 5th April 2006 ascribed the Authority with a legal basis to provide for administration, control, protection, improvement, conservation and development of the natural environment of the Loktak Lake and for matters connected with as incidental thereto. The Authority now functions under the aegis of the Department of Forest and Environment, Government of Manipur.

The authority, over the years, has grown into a professional lake management organization through the experiences gained and a systematic process of capacity building at various levels to effectively respond to the challenges of managing Loktak Lake through integrated lake basin management practices. The organizational structure of LDA has become more multidisciplinary over the years. The establishment of the Project Management Unit (PMU) has strengthened its project management and administration capacity.

The authority is also equipped with advanced equipment and machinery for both land and water management works needed for lake conservation and management.

The authority has set up a state of art Lake Monitoring Laboratory that monitors the health of the Lake Ecosystem based on a set of wide-ranging parameters. A network of hydro-meteorological stations has also been set up to monitor the hydrological regime of the Manipur River Basin as a whole while Remote Sensing and GIS laboratory has been spearheading monitoring of the wetland regime and the entire Manipur River basin especially the forest regime of such a large spatial dimension.

Restore and develop Loktak Lake resources and biodiversity for present and future generations through participatory processes, research and conservation activities.

First, I would like to thank CM Shri N Biren Singh ji and LDA officials for their support and the opportunity to serve as the Chairman of Loktak Development Authority (LDA).

Loktak Lake is one of the largest freshwater lakes in the country and a lifeline of Manipur. Encompassing an area of about 26,000 hectares and being the State’s fishery resource, the lake is not just a source of livelihood but a Goddess (Lairembi) to the people of Manipur and a Mother (Ima) to the fisherman community. It is the cradle of Manipuri civilization and culture.

We are the generation facing the ramifications of unsustainable modernising projects started by those before us and the challenge of protecting the rich biodiversity, long-held traditions, and the lake itself. The decisions of stakeholders of the past set in motion the fall of the lake’s ecosystem and the quality of life of the people that depend on it for sustenance.

As aware and responsible stakeholders, we are responsible for protecting such fragile and complex ecosystems as Loktak Lake. Every successful change requires more extensive and sustained mobilization, but it cannot grow by itself.

As the Chairman of LDA, I appealed to all the stakeholders, particularly the local elected representatives for their valuable support while carrying out the conservation and sustainable measures for preserving the Loktak Lake and its associated wetlands.

I also call upon the people of the State to take a pledge to contribute in concrete, meaningful efforts to save the Loktak Lake, a God-ordained treasure whose immense value we have often ignored, an opulence we should strive to keep alive.

Loktak is more than just a freshwater lake, a picturesque mass of water. It also is a home, a goddess, and a giver of life. No wonder it is often described as the lifeline of Manipur.

We have reached a point in our history where we cannot take a back seat and let others decide on the fate of Loktak Lake. The lake has undergone massive changes in the last three-four decades and is under extreme pressure from anthropogenic activities in and around the lake. At present, the lake is under threat from various elements such as encroachment, pollution, adverse conditions due to changes in water levels, and various developmental activities around the lake.

The core definition of sustainable development is a development that meets the needs of the present without compromising the ability of future generations to meet their own needs. But often, the economic benefits of the present are overestimated than the environmental and social costs.

I am glad that LDA is moving forward with sustainable development as a ‘mantra,’ and ‘WISE use’ as a guiding principle. At the same time, we need to listen to and acknowledge the concerns of people whose sustenance depends on the lake and other stakeholders.

I say this with a strong sense of hope and optimism that only together can we carry out the work of conservation and management of Loktak Lake and its associated wetlands. 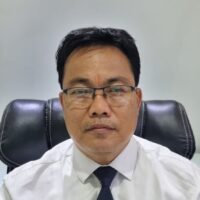